Take a Sip of the History of Tea

You are here: Home / Tea / Take a Sip of the History of Tea 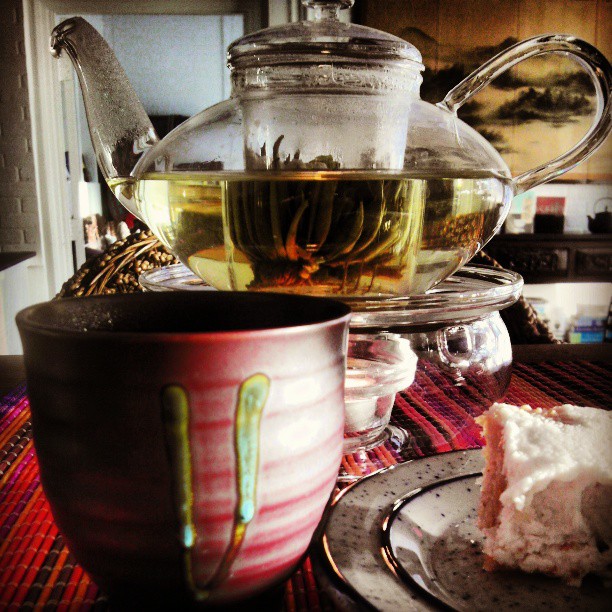 Tea is one of the most popular beverages world-wide. There are so many different flavors, varieties and ways of drinking it. Some people use it as a remedy for the common cold and some sip on it to unwind from a stressful day. Others simply drink it because it is so tasty! No matter how you like your tea, take the time to learn about the history of it!

Since tea comes from many cultures, thousands of years and counting, the history is complex. It has been said that it originated in Yunnan, China in the Shang Dynasty, which dates to around 1500 BC and was used as a medicinal drink. In a medical text in the 3rd century AD, the first record of tea drinking was made. According to Chinese legend, tea was invented accidentally by the Chinese Emperor Shen Nong in 2737 B.C. He felt that drinking boiled water contributed to good health. Servants had to boil their water before drinking it as a hygiene precaution. One day, dried leaves from a camellia bush fell into the boiling water. The emperor drank the infusion and liked the flavor. From then on, the popularity grew. During the 16th century, tea was introduced to Portuguese priests and merchants in China. Over the next hundred years, it became popular in Britain as well as India, where they introduced tea production. There are many Asian legends that discuss how tea was formed and used. It is no wonder why this has helped tea become a popular item in Asian culture, used as a beverage, curative and even status symbol.

During the American Revolution, the colonists consumed a lot of tea much like the British. When the transportation and sale of tea was taxed, it was a factor in the revolution. Although consumption slowed after that, the specialty tea market quadrupled in 1993-2008. Just as popular as coffee, tea can be found in almost any restaurant. Often hot brewed black tea is consumed. Iced tea is also a popular choice. The Southern states are big fans of sweet tea, which is often sweetened with sugar or artificial sweeteners. There are many specialty tea houses and retailers that are just as popular as coffee or wine bars.

There are thousands of different types of teas available. Many countries have their own crops where they cultivate their own. China remains one of the main producers of tea. The value of a tea is determined by its grade, in relation to the fineness of the harvest and the size of the tea leaf. You can find white, green, red, oolong, among so many others. Despite the many different colors that teas come in, they all come from the same tea plant. How they are treated (fermentation, oxidization, withering, drying) after the harvest that determines the type of tea it is.

If you are a tea fanatic or are looking to learn more about the different types there are, you can check out Zen Mystery’s Tea Lounge. You can try different organic teas like green or black and don’t forget to try the special Zen Mystery Blend, mixed with green rooibos, tulsi holy basil, and mint tea.