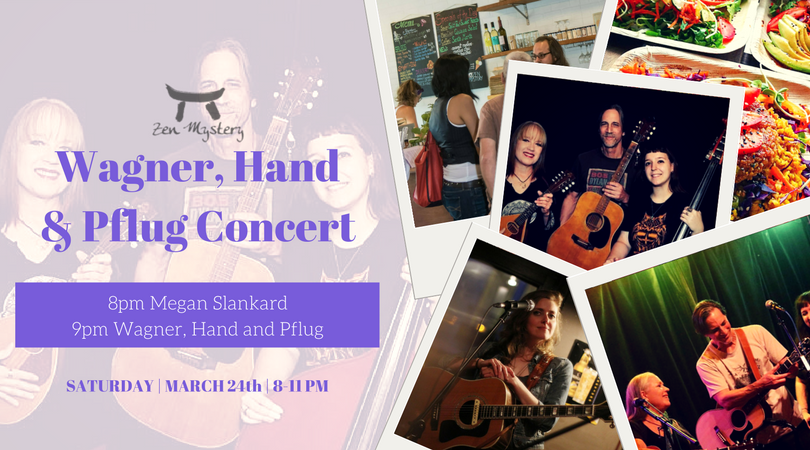 Join us for an amazing night of music:

About Wagner, Hand & Pflug:
Wagner, Hand & Pflug are a trio of singer-songwriters (Nancy Wagner, R. Hand, and Jamie Pflug) who combine years of under-the-radar experience performing solo and with alternative-rock, folk-rock and punk-rock bands. Their all-original recording is performed with acoustic instruments (guitars, mandolin, upright bass, harmonica, pedal steel guitar) and filled with three-part harmonies reminiscent of CSN&Y, The Byrds, The Band, and The Eagles and Fleetwood Mac.
https://www.facebook.com/Wagner-Hand-and-Pflug-249928541722236/

About Megan Slankard:
CALIFORNIAN INDIE-ROCKER Megan Slankard has independently sold nearly 40,000 copies of her five self-released albums, and she is touring extensively across the US and Europe in support of her band’s current release, “Running on Machinery,” which was recorded with the help of Nashville producer Alex Wong (Vienna Teng, Delta Rae).

Her preceding album, “A Token of the Wreckage,” was recorded with help from David Bryson (Counting Crows) and Jerry Becker (Train).

Megan’s adventures have also included opening for Jamie Cullum at a sold-out show at the renowned San Francisco venue, The Fillmore, playing electric guitar on ABC’s Jimmy Kimmel Live as part of the Jeff Campbell Band, twice singing the National Anthem to a crowd of 45,000 Giants baseball fans, performing duets with Pat Monahan of Train, and touring with Dire Straits co-founder David Knopfler throughout Europe.