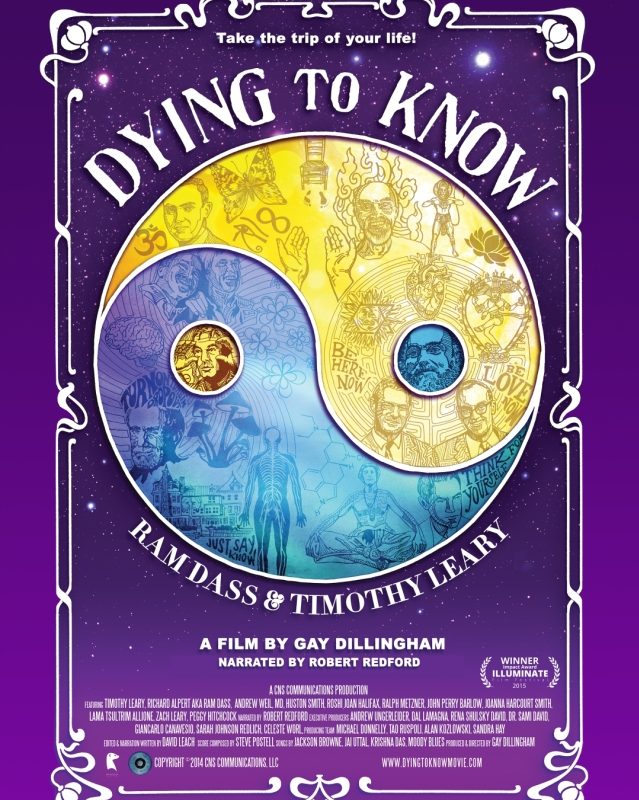 “Dying to Know” is an intimate portrait celebrating two very complex, controversial characters in an epic friendship that shaped a generation. In the early 1960s Harvard psychology professors Timothy Leary and Richard Alpert began probing the edges of consciousness through their experiments with psychedelics. Leary became the LSD guru, challenging convention, questioning authority and as a result spawned a global counter culture movement landing in prison after Nixon called him “the most dangerous man in America”. Alpert journeyed to the East becoming Ram Dass, a spiritual teacher for an entire generation who continues in his 80’s teaching service through compassion. With interviews spanning 50 years the film invites us into the future encouraging us to ponder questions about life, drugs & the biggest mystery of all: death.

In 1995 after years of estrangement Leary found out that he was dying of cancer. The first person he called was Ram Dass. In the 60s they had collaborated on a book entitled, ‘The Psychedelic Experience‘ which was based on The Tibetan Book of The Dead and explored the similarities of the psychedelic experience and the dying process. Each holding a remarkably different point of view about death they share their thoughts/perspectives and rekindle the love they have always felt for one another.

In this provocative film the viewer is a fly on the wall, observing an intimate conversation between Leary and Ram Dass just a few months before Leary’s death. It is a genuine exploration and an emotional respectful goodbye between two life long companions. We include subsequent interviews with Leary as he shares his dying process with us. Ram Dass who suffered a stroke himself not long after Tim’s passing shares his own perspective on death and dying. This story is much larger than a simple conversation between two old friends. It embraces the arcs of their entire lives helping us understand how two Harvard professors became counter – culture icons. We will explore their upbringing, early life and their fateful meeting at Harvard where together they ran fully sanctioned experiments into the nature and use of psilocybin and LSD before being fired in 1963. We follow them from Harvard to Millbrook where their experimentation continued and ultimately their friendship was tested and fractured. They both went their own way becoming legends in their own right. These chapters are highlighted using archival footage and stills. This tale of taboos: sex, drugs and death includes interviews in 2012 with Dr. Andrew Weil, Huston Smith, Roshi Joan Halifax, Ralph Metzner, Joanna Harcourt-Smith, Lama Tsultrim Allione, John Perry Barlow, Peggy Hitchcock and Zach Leary.

Robert Redford’s iconic voice as narrator gives a classic American feel and tone. Dillingham, the Producer/Director has contributed on & off 17 years of her life to this labor of love. She uncovers the wisdom these two men have as they continue to guide us on the next revolution – a right to access our own consciousnesses and our own death.

“The idea of anything that expands our thinking beyond conventional borders has always been of interest to me. When I see the living, breathing portraits of these characters, especially the early archival footage… To see them intelligent and smart – they were a kind of blessing considering how they have been caricatured in later times. I like what this film explores and I’m glad to be a part of it.” – Robert Redford

“A great piece of work and an extraordinary story well told.” – Sting